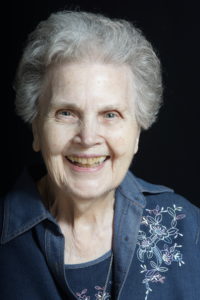 Sister Jeanne was born February 11th, 1931 in St. Louis, MO to Catherine R. (Dondon) Houlihan and Joseph P. Houlihan. She had 5 sisters and 3 brothers. Jeanne graduated in 1949 from St. Josephs Academy High School in St. Louis. In 1952 she earned a Bachelor of Science in Dietetics from Fontbonne College, St. Louis.

Sister Jeanne entered the Congregation at the Maryknoll Sisters Center, Maryknoll, NY on September 2nd, 1952 (from the archdiocese of St. Louis). She pronounced First Vows March 7th, 1955 at the Center and Final Vows March 7th 1961 in Hong Kong.

Her first overseas assignment was to Hong Kong in 1955. After Cantonese Language study at the Chinese University of Hong Kong, Jeanne began to teach religion and home economics at Maryknoll Convent School. Later, she became principal and supervisor of the same school. She also served as Chairperson of the Secondary Schools and as Biblical Knowledge Examination Coordinator.

In 1972, back in the States, Sister Jeanne earned a Masters of Arts in Education Administration from St. Louis University, St. Louis, MO.

During the Vietnamese Refugee years, she was a member of the Management Committee for the children under the Social Welfare Department. As an outreach, she taught English at the Mau Tau Wei Detention Home for Girls to give them skills and hope after they were paroled.

Sister Jeanne returned to Maryknoll, NY in 2010 where she continues to share her leadership skills in the Development Department.