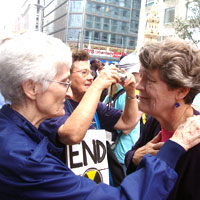 We Maryknoll Sisters were holding our General Assembly in New Jersey. The beautiful closing ceremony was on Saturday evening, just in time for us to make it. The Peoples’ Climate March was to start at 11 a.m. Sunday (September 21) and some events were even scheduled to happen around 9:00.

The Creator wanted us to be there.  Our group-of-nine were able to get an early start by boarding a nearby New Jersey Transit train.  When we entered the car, we were greeted with a big cheer by the whole car…all going to join “our march on behalf of Earth” and all her creatures…including us!

So, the March had started, right there on the train. That Group took us in, shared their signs and information. One of their members was from Nigeria and she shared with us the disaster that the oil companies are generating there.  We practiced chants with them, offering one of our own from Japan, in English, of course:  “Turn down the lights – turn off the heat – when you go out, use your feet!”

We kept connecting along the way until we reached the subway, where the promised extra “C” trains never came!  You can imagine the hoards as we tried to board the one that finally did come.  Just like Tokyo!  So when the group said “we can’t get in,” three of us from Japan replied: ‘Oh yes, we can!” and I became an official pusher.  We all made it on and off at the right place while other groups in the car continued on to their designated areas.  It was a good start and the March continued!

When we arrived at Columbus Circle, one of my Dominican friends pointed out “our” area.  We had decided to join the section where all religions assembled together… We found them easily… I wish you could have seen it…hundreds of us…all diverse religious beliefs…all there for the same reason… all together in solidarity on behalf of Earth, the great gift given to humankind.  No matter Who we named as Creator…no matter how we differed in theology, we were all one, even as representatives of each religion spoke or prayed, this diverse mass of folks from all over prayed together, laughed together, sang together and cried together.  This is what religions are meant to be…the energy that draws us all together in our beautiful diversity to become one humanity!  This is what humankind is meant to be!  Climate change is the reason, but the threat to our Earth is the call.

We started to March a little after 1:30 p.m.  That meant we had been standing together for around four hours, so we certainly were ready to go when asked:  Are you ready?   In front of us was an Ark with folks from our religions on board along with some animals (stuffed). That was a statement of survival in itself.  Just as we started off, a young woman came running up and asked if we were Maryknoll Sisters!  She just returned from Alaska, where she had given two years of her life in service as a volunteer; she wanted us to give loving greetings to her Maryknoll Sister Aunt Katie!

The police certainly had it easy since the organizers took over directing the crowd of groups as we marched along.  There was a feeling of urgent peacefulness.  Figure that one out, but it was true; a totally cooperative 310.000 people walking together to say…”we have got to do it now!  Everyone of us, every level of us… from governments to corporations, from industries & banks to just you and I”

If we do not want us all to experience a Katrina or Sandy or Fukushima or places where floods, landslides & tornados have become a way of life, we need to change our way of life… learning how to live without all the frills and privileges we have become so used to!  Guess that means back to the basics!  Our March was scheduled to give this message…all of it…to the United Nations… we are ready!

The climate march showed us how, by doing it together, we can turn it around….one humanity on this, our one and only Earth.  Its scientific name is morphogenic energy and we experienced it.