At Sacred Heart of Jesus School in Ilemela, Tanzania, outside the town of Mwanza, children are taught that water is so precious that the school is capturing rain drops from the heavens. 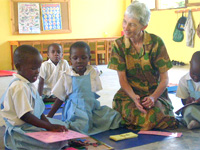 A lack of rain is making Tanzania’s food shortage worse. Recently, the government had to curtail food exports, and 185,000 people had be rescued from acute hunger through government food aid. Sister Celeste Derr’s students are learning from the crisis.

“We are trying to teach the children that water is an important resource needed by all God’s people,” said Sister Celeste, who founded the Montessori school in March as a project of the parish and the neighborhood. Already, the school has 65 students. Families have so little here that they have to pay their children’s tuition in flour. The school then uses the flour to feed the children a single cup of porridge every morning.

Students are also learning to protect the earth’s resources through conservation, thanks to a holding tank, built to collect precious rainwater by funds contributed by people outside Tanzania.

The world economic crisis is definitely affecting daily life in Tanzania as well. As it becomes harder for Tanzanians to produce enough food for themselves, Sister Celeste is seeing more students arrive at school having had nothing to eat at home.

“With an average of six to eight children in a family, I often wonder if a child here ever experiences a full stomach,” Sister Celeste said. “In recent weeks, much of the corn crop has been shipped to Kenya, where corn can be sold at a higher price for more profit and sugar has been transported to Uganda for the same reason,” she explained. Both corn and sugar are staples in Tanzania.

Sacred Heart of Jesus School isn’t an ordinary institute of learning, either. It was founded to benefit the parish’s orphans, HIV + children, and other three- to six-year-olds, who come from situations where there are special concerns.  All families help with expenses on a sliding scale, but Sister Celeste still sees many in the town struggling just to get by.

The area is also seeing increased violence and stealing as economic resources disappear. People are desperate to steal precious food supplies like corn, beans, rice and things like mattresses and cooking pots to re-sell in order to have some cash.

“This is a terrible scenario yet overall one can see the reason for the vicious circle which is becoming more and more prevalent,” Sister Celeste said.